Pete from one of our favourite blogs (and part inspiration for Drumtrip itself) blog to the oldskool is now taking orders for his 8205 Recordings label’s third vinyl release. Wicked jungle uncovered from the 90s vaults. A word from Pete… Happy to announce my label’s new release is up for preorder now! Two unreleased tracks from the 90’s,
Read More I don’t usually promote new releases, but as you can tell, I have an vested interest in this one. Back in 2009 I launched a label called “Repertoire” which had several digital releases and a single vinyl release. The mantra for the label was simple; contemporary jungle for the modern age. Fast forward to 2015
Read More If there is one thing synonymous with jungle (or is that infamous?), its dubplate culture. Whilst the dubplate may be more a symbol of the past in these digital times, anyone into D&B for 10+ years will probably remember waiting for months on end for that tune, they heard on the radio or in a
Read More 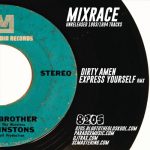 DJ Trax has dug around in the vaults to put together a brilliant mix to celebrate the first release on 8205 (a new label put together by Pete Devnull, man behind the excellent Blog To The Oldskool). The debut release, 8205-001, is a pair of old Mixrace tunes from 94/94 that never saw the light of day. Mixrace of
Read More