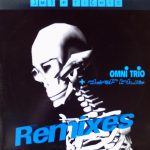 Music from when Moving Shadow, in my opinion, were at their peak. Nicely bridging the gap between jungle and hardcore, the way only the Shadow artist’s of the time could. In 1993, Foul Play, Omni Trio, JMJ & Richie, Cloud 9 and Hyper On Experience to name a few; were all at the top of
Read More