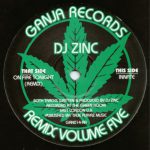 A bit of a special bargain jungle track this one. ‘Innate’ first found itself on vinyl via one of Zinc’s lesser known aliases ‘Jack Ruby‘. As Jack Ruby, Zinc experimented with the emerging deep and atmospheric (or Intelligent) sound pioneered by the likes of LTJ Bukem, and released a series of 12″s on Knowledge Records
Read More The great DJ Zinc may have mostly left D&B behind these days but there is no doubting his legacy and contribution to the genre and UK dance music in general. After a few early releases he starting out alongside Hype on their label Ganja Records where created one of D&B’s biggest anthems in Super Sharp Shooter. True Playaz
Read More