The second Drumtrip Radio show, recorded on 9th April 2014 and hosted by Dave M aka Brian Badonde! Having recently got hold of some super exclusive unreleased Invisible Man dubplates, Brian’s debut Drumtrip show is a homage Graham Mew, a man also known as Mysteron and Doctor G. A few of these tunes have never been played
Read More

I was asked if one of my old mixes could be showcased on eclectic music blog Two Hungry Ghosts, but I thought I would go one better than that and actually create a new mix just for the site. So I did. This happened “There was a period (roughly) between 1993 to 96 where jungle
Read More
J-Rolla has a record collection that would be the envy of pretty much anyone, I often gawp it on Discogs and try desperately to find a 12″ of mine that he doesn’t own, I rarely win. To further reinforce this fact he often puts together splendid mixes across the hardcore, jungle, D&B spectrum as well as Dubstep and probably
Read More 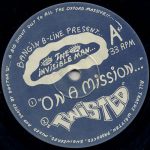 Hailing from Oxford, Graham Mew started life as a producer as Doctor G producing vintage breakbeat hardcore in 1991 and ’92. The Invisible Man alias surfaced that year with the launch of his new label Timeless Recordings in late 1992. The labels first release was the seminal On A Mission EP which helped laid the blueprint for the
Read More