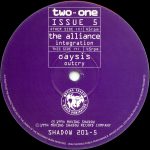 I don’t know a huge amount about Oaysis, as a trio their output was limited to a few early releases on DJ SS’s Formation Records and the dark Open Secrets on Moving Shadow in 1993. One of the the three members was Danny Hopkins, better known as Hopa who formed a productive partnership with ‘Bones’ in 1994. Outcry was
Read More
This might be the second mix of Eazyflow we have featured, this one thunders out some classic darkcore styles with some total classics like Shot In The Dark and Terminator, alongside few more obscure bits in the mix. Following on from the early 93 mix I posted a couple of weeks ago which was on
Read More