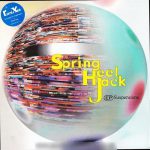 Bargain Jungle Spring Heel Jack were a production duo who started their career experimenting with the mid 90s jungle sound, on the edges of the jungle scene. Their debut LP ‘There Are Strings’ released on the respected Rough Trade imprint was a mix of lush atmospheric strings and chords with off kilter drums alongside a
Read More Drumtrip TV reached is 6th week on 26th March and it was quite the occasion. We had the amazing Kentish Kola Nut on the wheels who wowed us with his war-like appreciation of ruff and ready jungle work-outs. It was a great selection in the end, really varied with some underrated gems scattered with a few certified classics. Soundcloud MP3 Tracklisting
Read More