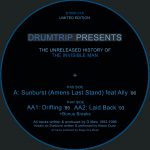 The second Drumtrip Radio show, recorded on 9th April 2014 and hosted by Dave M aka Brian Badonde! Having recently got hold of some super exclusive unreleased Invisible Man dubplates, Brian’s debut Drumtrip show is a homage Graham Mew, a man also known as Mysteron and Doctor G. A few of these tunes have never been played
Read More