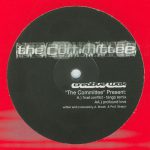 Creative Wax CW107 [1995] Ashley Brown (aka DJ Pulse, owner of Creative Wax and 1/3 of the hardcore act Dance Conspiracy alongside Adrian Shortman and James Hoyte) and Jamie Giltrap (aka Tango), both regular artists of the Creative Wax collective, joined forces in 1995 for the one-off project The Committee. The duo reunited after the
Read More