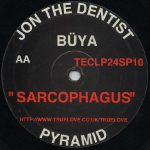 A bit of a cult classic this one. Trance and Hard House producer Jon The Dentist meets two of D&B’s finest in Trace & Ed Rush. There’s not too much information available online about the original mix – I assume it was 4-4 in nature, but Ed Rush and Trace turned it into a real
Read More